The Negative Effects of Multitasking 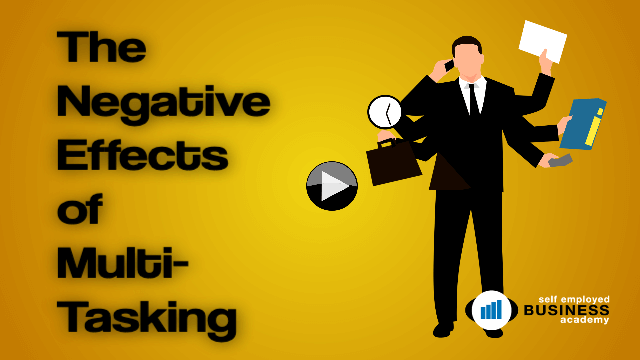 I often thought that it would be great to be able to multitask successfully, and I was very surprised to discover the negative effects of multitasking.

Here are some results of my research that I thought you may find interesting.

The idea of working successfully on more than one thing at a time is a scary one at that. For example, talking to someone on the phone, and checking your emails at the same time, causes a break in focus where you cannot complete either of the tasks successfully. (Believe it or not, some people also try to do this while driving.)

There are just too many things happening that cause you to break your concentration, and then you find yourself trying to get back to the place you left off and have the same thought pattern.

Anne Ihnen and Carolyn Flynn, in their book “The Complete Idiot’s Guide to Mindfulness,” stress the point that multitasking refuses to allow the brain to rest in between tasks, thus causing a time waste. This refocusing process is reported to be around 23 minutes until your focus is returned.

The mind is put into stressful situations when we multitask. You can compare it to trying to ride in two cars at one time.

This stress causes a waste of energy, and in the end, we find ourselves concentrating on just finishing up with the tasks at hand rather than giving a 100% effort.

Stress is a killer, as it causes the body to release toxins that simply deteriorate our mental and physical health.

Stress will also affect the quality of work that we do, as our concentration and focus is minimal, causing a slowdown in productivity.

Multitasking affects all three of these essential features: productivity, errors, and quality. Normally the mind needs to focus to ensure that top quality in production is the order of the day, and making sure there are no errors that could cause problems.

Another number that is huge, is the 50% increase in errors directly related to multitasking. Errors increase the cost of production, which is unacceptable. Errors may include failure to adhere to Standard Operating Procedures, and cause something as significant as a production stoppage. Or, it could be as simple as being distracted and not attaching a document, or worse still, sending the email to the wrong person.

The common misconception is that you are saving time when you multitask, but if you look at the research, you will see that it requires as much as 50% more time to finish a task while multitasking.

In a study using Microsoft employees, they discovered that it took upwards of 15 minutes to return to intense mental jobs like coding or report writing after reading emails or text messages.

Effects to Your Brain

The fact is that our brain is not set up for multitasking, so there are negative effects you should know about.

Areas of the brain that are affected by multitasking include those that have the responsibility over emotions, empathy, and cognitive control. All these are affected when multitasking, and in the end lead to poor mental health.

An additional issue is the reduction in IQ of 10%. The University of London reports in a study that multitasking lowers your IQ to something similar as smoking marijuana or doing an “all nighter.”

One thing that is for sure, is that you are not going to get smarter multitasking.

When we multitask, we see ourselves as superman or superwoman because we can do more than one thing at a time. However, the facts are very conclusive that multitasking negatively affects: