Golden Steps to a Successful Franchise 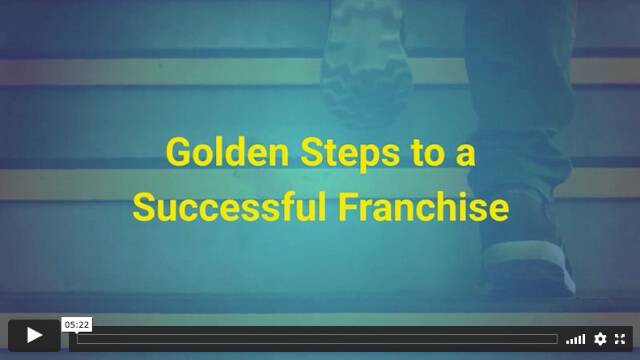 Franchising has become a popular way to get into business, but you must do your homework.

There are many different types of franchises – large ones like McDonalds and small ones like carpet cleaning. The truth is that they all require due diligence before you commit your time and money.

Here are some golden steps to ensure you have all the bases covered.

Years ago, I was introduced to a man who had a true entrepreneurial spirit.

He basically said to himself that he was not going to work for anyone else, so he kept opening businesses. He had a good success rate.

His last venture was rather unique, and I spoke to him about it just prior to his investing in it.

He decided to purchase a food industry franchise. He had never been involved in a franchise before and I asked him what he did to prepare for this investment.

Here are the steps that he told me he took in doing his due diligence.

When he said this, I was kind of taken back. Why would I need to self-evaluate?

The answer became quite evident as he continued.

He said that although he was a hard worker and had opened businesses in the past, he hadn’t realized the size of the commitment in owning a franchise.

Not that it was a bad thing. It was a good thing, as it made him understand things that he had not considered before. Things like the kind of hours he would have to work in this business.

His previous businesses operated from 9 to 5, so it was a big decision here as the food franchise meant weekend work as well as holidays.

He said he was also forced to consider the financial investment that he would have to make. How much money would come from his pocket and how much would he have to borrow? What was the expected return on investment? What was the risk vs reward?

He gave me this example.

He said it was like coming up to a golf hole where there was a lake to go over or to go around.

If you choose to go around, you would surely cut your chances of getting a birdie. On the other hand, if you can take a chance and manage to drive your golf ball over the lake, then you would be in a perfect position to score a birdie on the hole.

However, if you failed to drive over the lake and your ball goes into the water, you would lose your ball, incur a penalty stroke and have to play another shot just to get back into play. Risk vs reward!

Lots of stuff to consider.

“Look”, he said to me, “if I am going to give someone some of my hard-earned money then I want to know all the dirt, if there is any, on this franchiser.”

A franchisee, in this case, needs to know who he or she is getting in bed with, so to speak.

What is their reputation?

Have there been, or are there any legal actions against them?

How well do they support and work with their franchisees? Are they about a win-win or is it really all about them?

It would be possible to have the franchiser to perhaps stretch the truth a bit. So, you want to speak with other franchisees about the opportunity, not just the one or two they want you to speak with

You want to avoid being controlled. You can be sure that they will be looking at you as well with a fine-tooth comb.

While the best information you can ever get is the truth, it is also the hardest to find so you must search for it.

Franchisors want to put their best foot forward so they will give you a list of franchisees to speak with, and that is all well and good.

Select a few of your own to speak with as well, and ask questions like:

Don’t play legal eagle yourself. Look for a specialty lawyer, one who works in the field of franchising. You may pay a bit extra, but you need to know and understand the real small print.

You may get the impression that I am negative towards franchising. That is not the case and in fact, I think they can work quite well as businesses. However, it’s your time and money. So, don’t expect someone else to feel the same as you do about it.

In the end, you will need to look at everything and make that final decision yourself. However, if you follow the steps given above you will be well ahead of the game.

This presentation contains images that were used under a Creative Commons License. Click here to see the full list of images and attributions: https://link.attribute.to/cc/755163